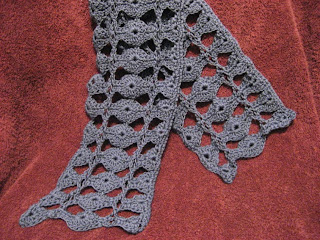 In my head I've just been thinking of this one as the circle scarf. It's actually called the Ammonite Scarf and it was designed by Ellen Gormley. I found the pattern in the October 2010 issue of Inside Crochet.

I stitched this one for the boyfriend's mom for Christmas, so it was one of those projects that I couldn't put up on the blog until after the holidays.

Unfortunately I seem to have misplaced the tags from the yarn, or I would be able to tell you exactly what it's made from. I know it was a Super 10 Cotton and I am fairly certain the shade is Periwinkle, but I could be wrong about that. 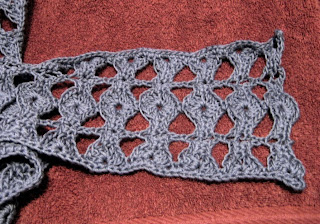 The design of the pattern is composed of horizontal circle motifs that are stitched together as you go. I'm not normally a fan of projects that involve motifs, but the fact that you work these ones in as you go, rather than having to stitch them all together at the end, made it much more enjoyable. Of course that doesn't mean there weren't dozens of lose yarn tails to sew in at the end, there were! Still, I was really drawn to the unique design, which makes for a lacy scarf, but doesn't look too traditional. 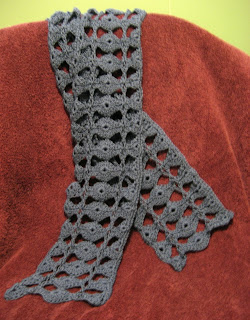 Labels: crochet, I Made This, scarf

This is really gorgeous! I can see it being very versatile as well.