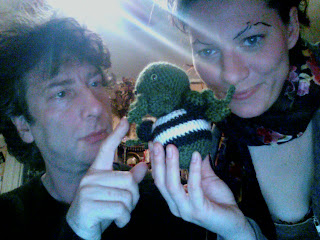 My Tiny Cthulhu pattern has hit the big time now. This cthulhu hanging out with writer Neil Gaiman and musician Amanda Palmer was sent to them by Mrs. Micah and stitched using my pattern. I have to confess that I wasn't familiar with Palmer's music before being sent this photo, but I'm a long-time fan of Gaiman's novels, so it's pretty cool to see him mesmerized by the adorable gaze of the Tiny Cthulhu. Thanks for sending the photo, Mrs. Micah!
I have to admit I've fallen a bit behind in posting pictures of the cthulhu cousins that readers have been sending me. Apologies to everyone who has been patiently waiting to see their creations on the blog. And as always, if you've made something using one of my patterns I'd love to see it. Feel free to post a photo link in the comments section.
Swedish blogger Kicki sent me this picture of a Cthulhu duo way back in September. She said her husband wanted the house filled with a whole army of Tiny Cthulhus! 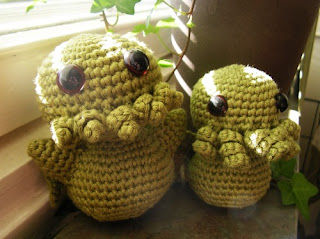 I really like the colour of yarn chosen by TheThirtySecondHour for this cthulhu. The way he's looking up like that makes him look so sweet and innocent. 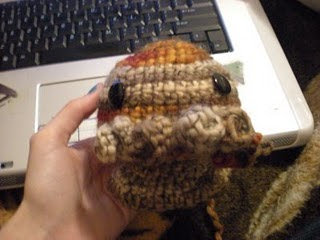 Schtididdle says it best in describing how her Tiny Cthulhu came to be:

"SO yeah... Started crocheting for the hell of it and found your pattern. After three granny squares I went at it. I've made three so far. Wings on the first one were... just... awful. Second one can't fly, see or operate machinery. SO here we have the mind shattering horror that is... PINKTHULHU!!!" 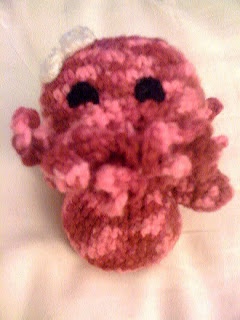 And hopefully your eyes aren't hurting too much from that last pink Cthulhu because we've got another one crafted by Amy Lynn. 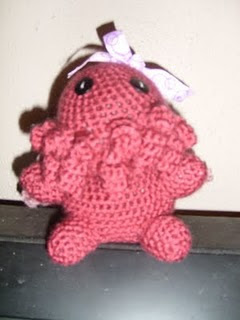 Now a traditional green Cthulhu courtesy of Vivian, (but he's sporting a pair of brown wings, just to be stylish). 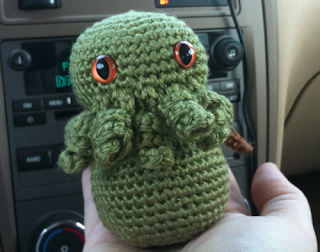 Looks like those brown wings are becoming a fad, as this cthulhu made by Keilana also has brown wings. Keilana commented that she wishes the "tentacles hadn't turned out quite so tightly coiled, but other than that I'm pretty pleased with the end result." I've never tried making the tentacles less coiled, but I bet it could be done if you alternated putting 3 sc in a chain space followed by only crocheting 1-2 sc in the next chain space. 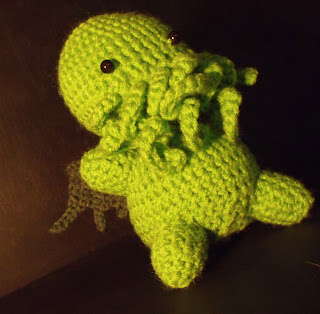 Once again thank you to everyone who has sent me photos of their creations. It's great to see the patterns are being used and that the Tiny Cthulhu is being enjoyed by so many people around the world.
Posted by amber at 3:20 PM

This is just way too much fun! I am looking around and enjoying your blog very much. ~Kelly

Holy crap! Neil Gaiman is on my girlfriend's blog!

Hi! I just used your pattern, and it was wonderful! I've never crocheted a figure before, I've been to scared, but when I saw your pattern I thought "What the heck, I'll give it a go.." And it turned out great! Now I'm filled with inspiration of making thousands of figures like this one! :D THANK YOU! :D