Crafting of a Different Sort 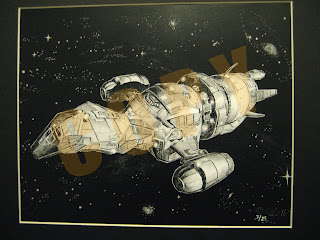 The boyfriend, who is both wise and witty, and I spent a day at V-Con 34 a couple weekends ago . Since most of the goodies I picked up there were by original artists and science fiction themed I thought I'd share a few pics here. Some of these were one-of-a-kind pieces so I've photoshopped "copy" text over them to prevent people from making their own versions from my pics. Hope no one minds, but the artist's are only getting the revenue from my payment and I'd feel bad about copies getting out.

Up first is this amazingly detailed picture of the Firefly ship Serenity. Most of you already knew that, right? This comes from Chilam and I picked it up from the convention's Art Auction. I chose to pay the direct buy price, since I never seem to have any luck when I try to get something by bidding. Now I just have to pick up a frame for it sometime. 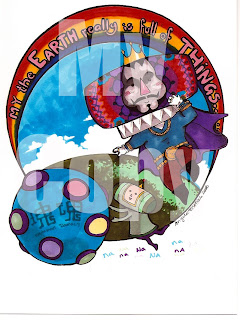 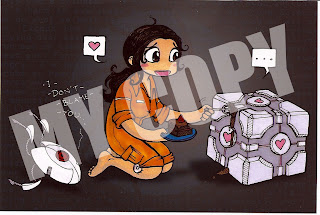 There were lots of really talented independent comic artists at V-Con this year. These next two pieces were printed on 4 X 6 inch photo paper and represent two of our favorite video games. These were drawn by comicker Angela Melick. You can check out her other work in her online comic Wasted Talent. No frames for these ones, I think they're going to become part of our growing collection of refrigerator art. 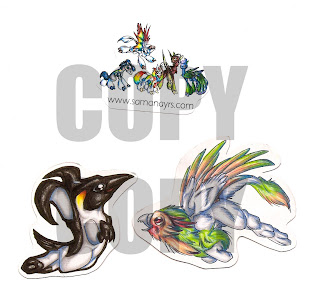 Sushi Dragon artist Lindsay Broadway's table is one of my favorite stops in the Dealer's Room at V-Con. This year all I picked up was the free sticker that's at the top of this picture. Below that are two magnets from Sushi Dragon that I purchased at a past V-con. I also have a necklace charm with one of her dragons, but it was too small to photograph well. I know the web page in the link isn't completed, but you can click on the DeviantArt, samanayrs and glassgryphs buttons at the bottom of the page to see more of her work. Personally I just love all the bright colours and the original look of her critters.

This picture comes from a t-shirt that I picked up in the Artist's Alley courtesy of Vigilant Comics. Some of my friends and I have an in-joke about ducs so the drawing of a monster gobbling up the ducklings at the end of the line tickled my funny bone. Sorry, to the uninitiated, I won't be explaining the joke. Hopefully you'll see the picture's charm anyway. 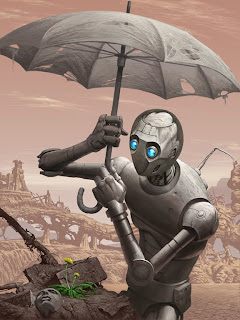 This last picture is "Chance Meeting" by James F. Beveridge. Something about this really appealed to me. It reminds me a bit of Wall-E. I was considering picking up a print of it from the Art Auction, but I had to forgo it due to a shortage of cash. It wasn't until I got home that I realized a full-colour version had been printed onto the backs of the V-Con 34 Program book. The paper quality obviously isn't as good as a real print, but it is approx. 8 X 11 inches and will probably look quite nice if I pick up a mat board and frame for it.

So that's my shopping experience at V-Con 34. We also went to quite a few panels and heard some great guest speakers this year including Tanya Huff (author of the Blood Ties novels which were later turned into a TV Series of the same name) and Christine Willes (who played the memorable and hilarious Dolores Herbig on the TV series Dead Like Me).
Posted by amber at 6:25 PM