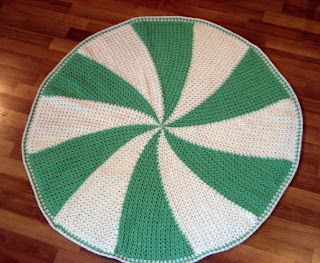 Well, this was certainly more than the seven day project that the book promised. I'm not complaining though because I love the final product. It was a fun afghan to make and I really like the swirly candy-like effect of the pinwheel stripes.

Not counting the couple of times I took this apart when I was trying to figure out the pattern, it took me about one day per stripe followed by another day to make the exterior border. So, let's call this a thirteen day afghan. I was worried the blanket would pucker up a bit with the three rows of border around the outside. Thankfully, it doesn't. I haven't taken exact measurements, but I'd say it's between 50 to 60 inches wide. Certainly bigger than your average baby blanket. Of course, it could easily just be folded in half over baby for extra warmth.

My version was made with Vanna's Choice in White and, appropriately enough, Mint. I was so excited when I read the label because all along I'd been planning for the blanket to look like one of those swirly mint candies you get in restaurants. As I mentioned in an earlier post, the version of the pattern I was using comes from 7-Day Afghans by Jean Leinhauser and Rita Weiss. There's also a version available in this leaflet from Bernat. Although that one is knit and has six stripes instead of twelve. The one in 7 Days is the only one I've run across that's crocheted. 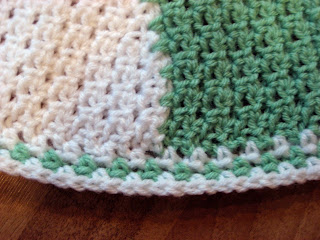 A close up so you can see what the stitches look like. It's a simple sc 1, ch 1, sc 1 pattern which turns out looking pretty intricate. For those that are curious, I actually ended up keeping the white stripe from the practice version I was making in the previous pinhwheel post. I tore out the mustard colour that I wasn't happy with and replaced it with this one. I think it's a much better combination!
Posted by amber at 7:38 PM

This is adorable! I love the colors - I think I prefer the mint green rather than the red. Fabulous job!

I have to say I like the mint better than that mustard colour as well. :D Great work! I picked up a copy of the book as well, and I'm slowly working on it. (So many other projects to finish :P...I need to finish some before I start any more I think. Heh.)

Thanks for the compliments! Amy B. what colours are you making your pinwheel with? Feel free to post a link to a picture of your pinwheel on this thread when you have it finished.

That is the neatest afghan! I would so do this with red and white, I love peppermints! lol I just found your blog today, it's been fun to go through and read past posts, have a great day!

Nice job!.. but I'm thinking this would be a great pattern for a beach ball type project too!.. like a beach blanket, or a beach bag?.. So the pattern's not only cute.. It's versatile too!

OMG That is adorable!!!!